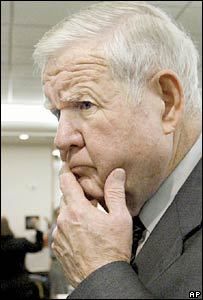 WHO AM I, PIG? WHERE AM I, PIG?
WHERE IS HERE, ANYWAY?
OKINAWA?
Yes! Withdraw our troops in Iraq to Okinawa!
Now!! 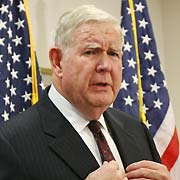 What a blathering idiot Democrat Congressman
The only "ex-marine" (no such thing otherwise) libels and slanders Marines. Now being sued for his vicious attack on some of our best fighters. Definitely should resign from or be kicked out of Congress for his bloated "pork" legislation siphoning off money from serious projects for self-serving, frivolous ones. Threating his colleagues if they try to prevent or oppose his piggish behavior.

CHECK OUT THE VIDEO PAGE

BLOGGER now provides video posting facility. Finally a good way to show some excellent .wmv videos. CHECK OUT THE ONES POSTED ON SATURDAY AUGUST 25TH
LATEST VIDEOS click here
Posted by Alan Peters at 12:06 AM 1 comment: Links to this post

Iraq's Shiite thug Al-Sadr (above) now sheltering in Iran and sharing their opium.

America and her quasi-backboned ‘allies’ have a huge problem that grows by the day. Expectedly, there are as many analyses of our problem as there are ‘experts’ to tell us what to think.

A deluge of Western analysts have their diverse expert opinions regarding the ‘Mullah Problem’ and what do about it. Some strategists advocate a military solution that ranges from full invasion of Iran to selective bombardment of its burgeoning nuclear centers and related facilities.

Others are proponents of imposing economic sanctions of various types and severity. Still others feel that we simply have to learn to live with the inevitable-those ‘crazy’ Mullahs with the bomb.

Perhaps there are no easy answers. But we should still take the time to understand the millstone that hangs around our collective necks. Perhaps within the problem is a solution. So what are the forces at work? What is the source of power that positions the Mullahs to be such a large threat?

Iran’s economy is a basket case. The ruling party has eviscerated productivity, employment, and consumer power, all while destroying personal freedom, and buying every weapon the Russians and Chinese can deliver.

The Islamic Republic of Iran represents the cutting edge for the newly petrodollar-invigorated Islam. This energy exporter/arms importer is not popular at home, but its rulers couldn’t care less. Iran is as far from a democracy as a country can get. No wonder it is adored by the ex-Soviets, and regional dictator-wannabes like Hugo Chavez.

But Iran is no ordinary tyranny. It has a special zeal that gives it an edge: Islam.

Iran is ruled by the mullahs, who are zealously determined to complete their Allah-appointed task of ending the world of ‘Dar-ul-Harb’-the non-Muslim world to be warred upon-and establishing the ‘Dar-ul-Solh,’ or ‘Dar-ul-Salam’- the Muslim world of the Ummeh under the rule of the ‘Mahdi.’

If achieving this aim hinges on the conflagration of a Third World War, the mullahs are more than eager to make it happen. This is their self-proclaimed destiny.

Karl Marx once said derisively that ‘religion is the opiate of the people.’ If so, the militant Islam of Iran is more like crack cocaine than opium.

Islam is the foundation for the Iranian theocracy’s ideology of hate and destruction, but it is not the only force propelling it. Therefore, do not dismiss these vicious destroyers as mere ‘religious fanatics,’ therefore harmless old cranks who are disconnected to reality, soon to be replaced by sane moderates.

They are nowhere near the point of being forced out by a natural revolution. They know what they are doing, and they are playing a very long game of chess.

Likewise do not doubt their steadfastness to their cause even if it means their own annihilation. If invoking catastrophe will compel their precious Mahdi’s coming, their sentiment is ‘bring it on.’

We should rid ourselves of the ‘happy talk’ we tranquilize ourselves with by reasoning that these doddering old-world religious fools may be mischievous, but they could never do real harm. Oh, sure, they might be arming some Iraqi Shiites, killing a few US soldiers, providing a little support for Hizbollah in Lebanon and Hamas in Palestine - but they have no global destructive capacity.

After all, we pacify ourselves that we’re not exactly talking about criminal masterminds like Hitler. Or are we?

Such optimistic self-delusions fully misunderstand the evil genius of the Mullahs. The mullahs’ method of staying in power relies heavily on oil for arms... and arms for power. They have a sizable but otherwise insufficient cadre of true-believing Shiites, but popular support is not needed in their situation.

To remain in power, their apparatus relies on ‘preventive’ measures. They don’t bother much with due process of law. Their ‘revolutionary guard’ dispenses with the ‘due’ and gets right to the ‘process.’ On the slightest suspicion, they arrest, convict and execute. They let Allah in the next world take the time to determine the person’s guilt or innocence.

Presently, the Mullahs have been doing all they can to imprison and kill with impunity the internal opposition, and want the rest of the world to keep its nose out of their ‘family’ business. Executions in Iran have skyrocketed.

This bunch of miscreants has the full support of Syria, Venezuela, and Russia. They have enthusiastic support from many terrorist organizations in the region and drug-running organizations worldwide.

They have tacit support from China, Cuba, and France because the power structures of these countries resent the USA, and Iran is the leader in the expression of threats against the US ‘superpower.’

The Mullahs receive relatively little criticism from semi-socialist democracies like Western Europe and Canada who seem obsessed with anti-Bush, anti-US diatribes. Certainly the UN could care less about their bomb-building, and would be holding ‘talks’ after the first detonation because ‘everybody knows war never solved anything.’

The Mullahs have nothing but support and few distractions. They’re not going anywhere without a very big push.

The mullahs have their job to do on God’s earth: to cleanse it of all infidels. When one has a tall order like that to fill, he can’t be bothered with the tedious due process the Western democracies ‘waste’ so much time and resources on.

But these high priests of Iran are not exactly living up to their brand. The mullah mafia has a great scam going. They promise the ignorant Islamic devotees the phony ‘paradise’ of afterlife while they themselves enjoy their paradise of women, wealth and wine on this earth.

They are unrivaled in duplicity and heartlessness. So in nearly perfect emulation of Muhammad and his leadership 1400 years ago, the pious Mullahs go about plotting earthly destruction as they enrich themselves and enjoy earthly pleasures on the backs of their people. Nice work, if you can get it.

Lest you think these men should at least be admired for their self discipline and abstention from personal sins, know that a sizable chunk of the mullahs are heavy opium smokers.

No one can prove it, of course, but I don’t doubt it. In that land, opium smoking is still very popular with people who can afford the fruit of the Poppy. It is the Muslim’s alcohol.

Although its use is prohibited by law, with stiff penalties on the books, the use of opium continues and has become more endemic than ever under the mullahs’ rule. This is in part because many of the mullahs as well as the law-enforcement officials are users and many officials make a personal fortune by getting their cuts from the traffickers.

Opium is the drug of choice in the countryside, and heroin is primarily used by the more affluent city dwellers. Moreover, this is the drug that is used to calm the restless people. And don’t think that a little of their stash doesn’t make its way to the west.

The mullahs take pleasure and pride in their lavish lifestyle and power, and they want to bequeath it to their children, not to the people of Iran. So they assure their minions that Allah does not approve of the anti-Islamic practice of democracy, an invention of ‘western devils.’

Be sure to remember that these crafty, evil men are also long-term planners. They have messianic plans to rule the world some day. And with their lifestyle, they can have their cake and eat it too: leisure, power, and destruction, insulated from the corrective forces of the political marketplace.

The mullahs are superb practitioners of the art of making a deal. In this practice, like in the game of poker, much depends on how one plays their hand. In the game of deal-making, beating around the bush is a standard operating procedure. They know that weak-willed Westerners feel productive when they ‘talk,’ and engage in ‘negotiations.’

These activities do nothing; but then again, accomplishing anything other than advancing their own careers and generating an undeserved sense of self-importance is never the goal of careerist diplomats.

As for the ‘Great Satan,’ going after the mullahs seems completely out of the question. We have no stomach for it; the Ayatollahs know it. Even Bush’s most loyal sidekick, ex-UK PM Tony Blair, was opposed to it.

I hope that the Iraq misadventure has taught them an old lesson they seem to have had difficulty learning: it is a terrible mistake to go half way across the world and invade a country, unless you are able and willing to bulldoze the whole thing from one end to the other, with all the people bar none buried under the rubble.

The reason this rule is so important for us to learn is that having and displaying overwhelming power usually means you will not have to use it. But because the West has forgotten how to overwhelm the enemy, the war of attrition persists, and the people of the West become disheartened.

They can’t even interrogate presumed terrorists; they have to send them to Egypt to get the job done!

It’s no wonder that recent military undertakings have been by-and-large busts- in Korea, Vietnam, Iraq and even Afghanistan. This same policy of weakness has been successfully replicated in Israel, where the West ties Israeli hands behind their back so they don’t ‘over-react’ to missiles hitting their towns and cities, tunnels dug under their borders, and soldiers being captured by terrorists!

The Mullahs know this game very, very well. They persist, and we pretend the worst can’t happen. Whose opiate is the more effective, theirs or ours?

In the meantime, Iran’s illegitimate regime will, with ever greater peace of mind, pursue their quest for the nuclear bomb, by hook or by crook, and the mullahs of mass destruction will keep the corrupt, yawning, toothless UN ‘watchdog’ content and distracted by throwing it a bone or two from time to time.

Eventually, these suicidal, homicidal followers of Muhammad will have their WMD. In time, they will use it. Future historians will ask: how could the entire world have seen it coming and done nothing about it? What kind of opiate were these people on? Source:

Posted by Alan Peters at 8:51 PM 3 comments: Links to this post