SIGHT BY ECHOLOCATION NOT ONLY FOR BATS - BUT FOR DANIEL, TOO

The Blind Man Who Taught Himself To See


Daniel Kish has been sightless since he was a year old. Yet he can mountain bike. And navigate the wilderness alone. And recognize a building as far away as 1,000 feet. How? The same way bats can see in the dark. 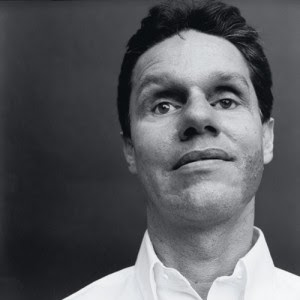 The first thing Daniel Kish does, when I pull up to his tidy gray bungalow in Long Beach, California, is make fun of my driving. “You’re going to leave it that far from the curb?” he asks. He’s standing on his stoop, a good 10 paces from my car. I glance behind me as I walk up to him. I am, indeed, parked about a foot and a half from the curb.

The second thing Kish does, in his living room a few minutes later, is remove his prosthetic eyeballs. He does this casually, like a person taking off a smudged pair of glasses. The prosthetics are thin convex shells, made of acrylic plastic, with light brown irises. A couple of times a day they need to be cleaned. “They get gummy,” he explains. Behind them is mostly scar tissue. He wipes them gently with a white cloth and places them back in.

Kish was born with an aggressive form of cancer called retinoblastoma, which attacks the retinas. To save his life, both of his eyes were removed by the time he was 13 months old. Since his infancy — Kish is now 44 — he has been adapting to his blindness in such remarkable ways that some people have wondered if he’s playing a grand practical joke. But Kish, I can confirm, is completely blind.

He knew my car was poorly parked because he produced a brief, sharp click with his tongue. The sound waves he created traveled at a speed of more than 1,000 feet per second, bounced off every object around him, and returned to his ears at the same rate, though vastly decreased in volume.

But not silent. Kish has trained himself to hear these slight echoes and to interpret their meaning. Standing on his front stoop, he could visualize, with an extraordinary degree of precision, the two pine trees on his front lawn, the curb at the edge of his street, and finally, a bit too far from that curb, my rental car. Kish has given a name to what he does — he calls it “FlashSonar” — but it’s more commonly known by its scientific term, echolocation.

Bats, of course, use echolocation. Beluga whales too. Dolphins. And Daniel Kish. He is so accomplished at echolocation that he’s able to pedal his mountain bike through streets heavy with traffic and on precipitous dirt trails. He climbs trees. He camps out, by himself, deep in the wilderness. He’s lived for weeks at a time in a tiny cabin a two-mile hike from the nearest road. He travels around the globe. He’s a skilled cook, an avid swimmer, a fluid dance partner. Essentially, though in a way that is unfamiliar to nearly any other human being, Kish can see.

This is not enough for him. Kish is seeking — despite a lack of support from every mainstream blind organization in America — nothing less than a profound reordering of the way the world views blind people, and the way blind people view the world. He’s tired of being told that the blind are best served by staying close to home, sticking only to memorized routes, and depending on the unreliable benevolence of the sighted to do anything beyond the most routine of tasks.

Kish preaches complete and unfettered independence, even if the result produces the occasional bloody gash or broken bone. (He once fractured the heel of his left foot after leaping from a rock and has broken a couple of teeth.) He’s regarded by some in the blind community with deep veneration. Others, like a commenter on the National Federation of the Blind’s listserv, consider him “disgraceful” for promoting behavior such as tongue clicking that could be seen as off-putting and abnormal.

Kish and a handful of coworkers run a nonprofit organization called World Access for the Blind, headquartered in Kish’s home. World Access offers training on how to gracefully interact with one’s environment, using echolocation as a primary tool. So far, in the decade it has existed, the organization has introduced more than 500 students to echolocation. Kish is not the first blind person to use echolocation, but he’s the only one to meticulously document it, to break it down into its component parts, and to figure out how to teach it. His dream is to help all sight-impaired people see the world as clearly as he does. 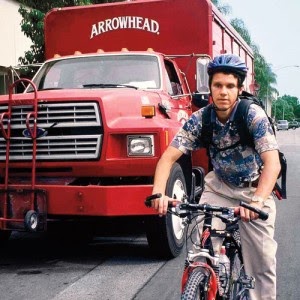 Kish, here biking in Long Beach, preaches total independence. Photo courtesy Daniel Kish
It begins with the lid of a pot. “Stand up,” Kish instructs, then guides me to the center of his living room and ties a blindfold around my head, while mentioning, in a schoolteachery tone, that I should not for an instant think that wearing a blindfold represents the experience of being blind. A blindfold almost always causes someone who can see to feel frightened, confused, and disoriented. Kish is none of these things.

“Now wait here,” he says. Though he was born and raised in Southern California, Kish has an odd, almost foreign-sounding accent — a bouillabaisse of Canadian, British, and relaxed Los Angeleno. He says it’s a result of his many travels. “I’m a natural mimic,” he explains. Kish is 5-foot-7, thin and fit, with an impressive mane of dark brown hair and a meandering winestain birthmark on his left cheek.

I hear him walk into his kitchen, his bare feet padding faintly on the hardwood floor. “I’m very particular about feeling life and air around my feet,” he once wrote in the journal he braille-typed and shared with me. I’m barefoot as well. Kish asked me to remove my shoes, which is one of his many little rules you quickly learn to adopt. Like: He’s Daniel Kish, and anyone who calls him “Dan” more than once may be struck with withering disdain. And don’t disturb him during his sleep time — lately, he’s been sleeping just two hours twice a day, usually from 5 to 7 in the morning and again from 5 to 7 in the evening. He often stays up all night dealing with World Access logistics. He lives alone and does not have a significant other. He plays a lot of Celtic hymnal music.

I listen as Kish opens a cabinet and rummages amid his pots. He returns and stands behind me. “Make a click,” he says.

It’s a terrible click, a sloppy click; what Kish calls a “clucky click.” Kish’s click is a thing of beauty — he snaps the tip of his tongue briefly and firmly against the roof of his mouth, creating a momentary vacuum that pops upon release, a sound very much like pushing the igniter on a gas stove. A team of Spanish scientists recently studied Kish’s click and deemed it acoustically ideal for capturing echoes. A machine, they wrote, could do no better.

My click will work for now. Kish tells me that he’s holding a large glass lid, the top to a Crock-Pot, a few inches in front of me. “Click again,” he says. There’s a distinct echo, a smearing of sound as if I’m standing in my shower. “Now click,” he says. The echo’s gone. “I’ve lifted it up. Can you tell?”

“Try again,” says Kish. “But move your head, listen to your environment.”

I turn my head to the right and click. Nothing. Then I click to the left. Bingo. “It’s over here,” I say, tilting my head in the direction of the lid.

There are two reasons echolocation works.

The first is that our ears, conveniently, are located on both sides of our head. When there’s a noise off to one side, the sound reaches the closer ear about a millisecond — a thousandth of a second — before it reaches the farther ear. That’s enough of a gap for the auditory cortex of our brain to process the information. It’s rare that we turn the wrong way when someone calls our name. In fact, we’re able to process, with phenomenal accuracy, sounds just a few degrees off-center. Having two ears, like having two eyes, also gives us the auditory equivalent of depth perception. We hear in stereo 3-D. This allows us, using only our ears, to build a detailed map of our surroundings.


The second reason echolocation works is that humans, on average, have excellent hearing. We hear better than we see. Much better. On the light spectrum, human eyes can perceive only a small sliver of all the varieties of light — no ultraviolet, no infrared. Converting this to sound terminology, we can see less than one octave of frequency. We hear a range of 10 octaves.

We can also hear behind us; we can hear around corners. Sight can’t do this. Human hearing is so good that if you have decent hearing, you will never once in your life experience true silence. Even if you sit completely still in a soundproof room, you will detect the beating of your own heart.

Wow, that's amazing! This man should be studied scientifically if he consents!