General consideration needed when you think about Iran = Hojatieh! 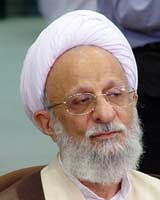 Mesbah Yazdi "Hojatieh" headed by looney Ayatollah Mesbah Yazdi, wants the quick return of the 12th Imam, a boy who disappeared down a well in the 1300s and is a direct descendant of the Prophet Mohammad.

Ahamdi-Nejad is a desciple of Mesbah Yazdi and a true believer of the Hojatieh.

The Hojatieh creed, which was too crazy even for Khomeini, who created the Islamic regime in Iran, says the 12th Imam will return to bring salvation to mankind (similar to the second coming of Christ concept) BUT ....

In order for him to return for this purpose there has to be sufficient death, misery, oppression, pain and suffering in the world to make it worth his while (so to speak).

THUS.... to encourage a speedy return of the 12th Imam, the Hojatieh (presently the dominant Islamic creed in Iran with Mesbah Yazdi the power behind the throne and likely to become the Supreme Ruler in the very near future) insists that their duty is to create enough death, misery, oppression, pain and suffering to entice the 12th Imam to return.

AND.... Anyone who acts to prevent all this suffering etc., is against Islam (as per Hojatieh) and as an apostate should be killed.

SO.... fear of mutual self-destruction - as was the case with the Soviets and to some extent with the Chinese - is exactly the opposite of what the Hojatieh want, fear or believe.

They would love mutual self-destruction to occur so that they create enough reason for their 12th Imam to return to the world and bring Islamic salvation.

Whenever you think of Iran think of this and understand that anything and everything you have held dear and reasonable about them NO LONGER HOLDS TRUE.

Pol Pot of Cambodia, who murdered millions of his own countrymen, some for simply having weak eyesight and wearing glasses (inference of being educated) was a Boy Scout and really sane compared to what we have at the helm in Iran.

And we quibble whether we should perhaps not bomb Iran and allow this bunch of lunatics to have nuclear weapons to implement their Hojatieh philosophies on the rest of the world.

The only real question is which "innocents" to save. The Iranian population of some 70 million (though only a few hundred thousand would actually perish) or HUNDREDS of millions around the globe when Iran unleashes nuclear weaponry AND THEIR OIL WEAPON - in the near future and triggers something even Hitler could not dream of or even wish to achieve.

Here is Amir Taheri's take on the same subject:

Last Monday, just before he announced that Iran had gatecrashed "the nuclear club", President Mahmoud Ahmadinejad disappeared for several hours. He was having a khalvat (tête-à-tête) with the Hidden Imam, the 12th and last of the imams of Shiism who went into "grand occultation" in 941.

According to Shia lore, the Imam is a messianic figure who, although in hiding, remains the true Sovereign of the World. In every generation, the Imam chooses 36 men, (and, for obvious reasons, no women) naming them the owtad or "nails", whose presence, hammered into mankind's existence, prevents the universe from "falling off".

Although the "nails" are not known to common mortals, it is, at times, possible to identify one thanks to his deeds. It is on that basis that some of Ahmad-inejad's more passionate admirers insist that he is a "nail", a claim he has not discouraged.

For example, he has claimed that last September, as he addressed the United Nations' General Assembly in New York, the "Hidden Imam drenched the place in a sweet light".

Last year, it was after another khalvat that Ahmadinejad announced his intention to stand for president. Now, he boasts that the Imam gave him the presidency for a single task: provoking a "clash of civilisations" in which the Muslim world, led by Iran, takes on the "infidel" West, led by the United States, and defeats it in a slow but prolonged contest that, in military jargon, sounds like a low intensity, asymmetrical war.

In Ahmadinejad's analysis, the rising Islamic "superpower" has decisive advantages over the infidel. Islam has four times as many young men of fighting age as the West, with its ageing populations. Hundreds of millions of Muslim "ghazis" (holy raiders) are keen to become martyrs while the infidel youths, loving life and fearing death, hate to fight. Islam also has four-fifths of the world's oil reserves, and so controls the lifeblood of the infidel. More importantly, the US, the only infidel power still capable of fighting, is hated by most other nations.

According to this analysis, spelled out in commentaries by Ahmadinejad's strategic guru, Hassan Abassi, known as the "Dr Kissinger of Islam", President George W Bush is an aberration, an exception to a rule under which all American presidents since Truman, when faced with serious setbacks abroad, have "run away". Iran's current strategy, therefore, is to wait Bush out. And that, by "divine coincidence", corresponds to the time Iran needs to develop its nuclear arsenal, thus matching the only advantage that the infidel enjoys.

Moments after Ahmadinejad announced "the atomic miracle", the head of the Iranian nuclear project, Ghulamreza Aghazadeh, unveiled plans for manufacturing 54,000 centrifuges, to enrich enough uranium for hundreds of nuclear warheads. "We are going into mass production," he boasted.

The Iranian plan is simple: playing the diplomatic game for another two years until Bush becomes a "lame-duck", unable to take military action against the mullahs, while continuing to develop nuclear weapons.

Thus do not be surprised if, by the end of the 12 days still left of the United Nations' Security Council "deadline", Ahmadinejad announces a "temporary suspension" of uranium enrichment as a "confidence building measure". Also, don't be surprised if some time in June he agrees to ask the Majlis (the Islamic parliament) to consider signing the additional protocols of the Nuclear Non-proliferation Treaty (NPT).

Such manoeuvres would allow the International Atomic Energy Agency (IAEA) director, Muhammad El-Baradei, and Britain's Foreign Secretary, Jack Straw, to congratulate Iran for its "positive gestures" and denounce talk of sanctions, let alone military action. The confidence building measures would never amount to anything, but their announcement would be enough to prevent the G8 summit, hosted by Russia in July, from moving against Iran.

While waiting Bush out, the Islamic Republic is intent on doing all it can to consolidate its gains in the region. Regime changes in Kabul and Baghdad have altered the status quo in the Middle East. While Bush is determined to create a Middle East that is democratic and pro-Western, Ahmadinejad is equally determined that the region should remain Islamic but pro-Iranian. Iran is now the strongest presence in Afghanistan and Iraq, after the US. It has turned Syria and Lebanon into its outer defences, which means that, for the first time since the 7th century, Iran is militarily present on the coast of the Mediterranean. In a massive political jamboree in Teheran last week, Ahmadinejad also assumed control of the "Jerusalem Cause", which includes annihilating Israel "in one storm", while launching a take-over bid for the cash-starved Hamas government in the West Bank and Gaza.

Ahmadinejad has also reactivated Iran's network of Shia organisations in Bahrain, Kuwait, Saudi Arabia, Pakistan and Yemen, while resuming contact with Sunni fundamentalist groups in Turkey, Egypt, Algeria and Morocco. From childhood, Shia boys are told to cultivate two qualities. The first is entezar, the capacity patiently to wait for the Imam to return. The second is taajil, the actions needed to hasten the return. For the Imam's return will coincide with an apocalyptic battle between the forces of evil and righteousness, with evil ultimately routed. If the infidel loses its nuclear advantage, it could be worn down in a long, low-intensity war at the end of which surrender to Islam would appear the least bad of options. And that could be a signal for the Imam to reappear.

At the same time, not to forget the task of hastening the Mahdi's second coming, Ahamdinejad will pursue his provocations. On Monday, he was as candid as ever: "To those who are angry with us, we have one thing to say: be angry until you die of anger!"

His adviser, Hassan Abassi, is rather more eloquent. "The Americans are impatient," he says, "at the first sight of a setback, they run away. We, however, know how to be patient. We have been weaving carpets for thousands of years."

Posted by Alan Peters at 2:12 PM No comments:

This Home page intentionally carries only in depth, longer analysis or briefings about Iran. As well as links to three or four specific , horrible videos.

Shorter items and newsy bits are covered in Latest News Briefs, whose link is in the left hand Frame/Column. The Audio/Video and the Graphics (or photos) both "new" sections with links to them also on the left, have some content and will grow as I add to them, so do take a quick look in passing for new items.
Posted by Alan Peters at 4:14 PM No comments: