With the announcements by the Islamic Regime of impending gasoline (petrol) rationing, the last few days have seen long lines of upset citizens at gas stations throughout Iran. As supplies dwindled, tempers flared till this evening/tonight upset crowds set fire to some 50 gas stations in Tehran and tens of thousands of protesters marched from the eastern part of Tehran called Tehran Pars to Imam Hossein street. 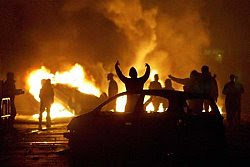 Clashes have occurred around the capital city with the Islamic Supression forces, mostly Bassijis, firing live rounds into the crowds protesting the gasoline rationing. And voicing their anger at the way the Islamic Regime under Ahmadi-Nejad has mishandled the economy, has sent huge sums, in the hundreds of millions of dollars, overseas to groups like Hamas and Hezbollah, while Iranians rummage in trash bins to survive. About half a billion dollars was also diverted to Syria to buy Russian made weapons both for Syrian transfet to anti-israel groups in the Palestinian areas and for Russian fighter jets for Iran itself via this proxy buyer. While Islamic government forces of Iran fired shots into protesters in Kermanshah, reports indicate that the populace of Sanandaj, a largely Kurdish city, have taken over control of the township and are now in charge. Other cities throughout the nation are experiencing unrest and protest against the Mullahs.

Stepped up suppression and arrests over the past few weeks of any dissenting voices - students, teachers or workers show that the regime has been expecting trouble and tried to head it off.

Whether something comes of this or extended bloodshed by Ahmadi-Nejad and his Revolutionary Guards snuffs out the sudden opposition still remains to be seen.

SSHHHH! The JOOZZ might hear you and take advantage! And then where would the Mighty Mullah Bombers be?

Allan,
Following the petrol shortage people are copying and distributing cassettes of Khomeini's speeches when he promised the crowds that under his Islamic vision necessities such as electricity and petrol would be distributed free of charge!
Apparently millions of copies have been distributed.

The Ayatoilets are robbing Iran blind. They have energy exports of over $300 million per with the money going to their bank accounts in Switzerland and Brunei banks wehn The people who are the owners of the resources can receive rationed fuel per vehicle and pay petroleum prices 1000 times higher than they paid during the Shah's time.

Keep up the good blog