FROM SEWER TO OCEAN?

Ahmaghi-Nejad, often called Ahmadi-Nutjob, seems hell bent - both literally as a destination and per his Hojatieh philosophy of Apocalypse and Armageddon - on making sure the Coalition forces, the USA and/or Israel attack Islamic Iran.
He threatens to retaliate any attack on his military by trying to wipe out, no not Israel, but his Arab neighbors in the Persian Gulf, all of whom are within reach of his missiles.
Specially their oil and gas fields so as to ensure the world has a energy crisis like never before imagined. 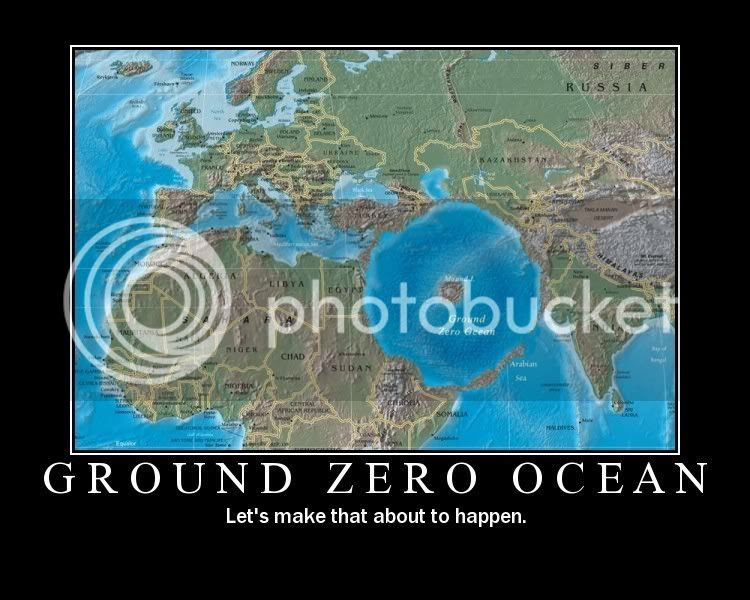 He could not care less that he will take a huge number of innocent Iranian victims he arrests, terrorizes, tortures to their deaths with him. Perhaps as a welcome relief to the misery and distress he causes them and their families.

Also going to hell would be some 400,000 Revolutionary Guards, Bassiji suppression force mercenaries and at least 30,000 civilians under whose homes the nuclear failitgies have been built in deep tunnels.

The 'nutjob" and his Passdar colleagues belive that lame duck President Bush will not have the guts nor support to order an attack.

What they might be forgetting is a lame duck Bush, if provoked enough might say "to hell " with the Nutjob and with little or nothing to lose politically and no personal re-election to consider, go ahead and do to Islamidc Iran what the picture shows.

His choice will be and is: "deal with Iran without nukes now or hold back and have to face the rogue, suicidal Iran after it acquires nukes". What do you think the final answer will be.

After, of course, all gasoline (petrol) exports to Iran are banned by the United Nations, after Iranian oil and natural gas exports are embargoed (not all that effective with China thirsty for oil) but enough to disrupt internal control by the Mullahs as the Islamic economy - already tanking - crashes and burns.