IRAN TODAY ANALYSIS & HEADS UP! And a Newt Gingrich video! 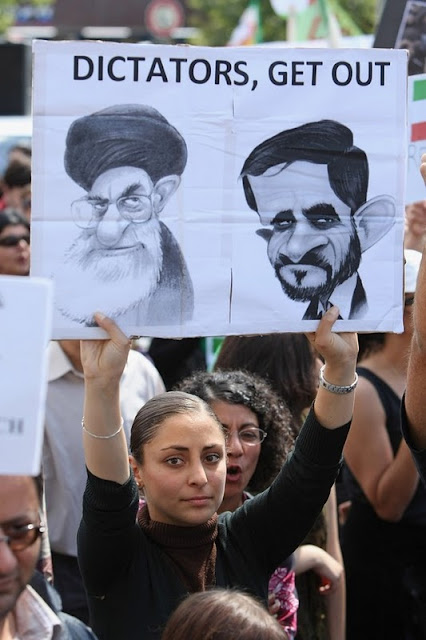 Two articles, posted in the Multilingual section of AntiMullah in Farsi under the title of “Khamenei’s secret life”.

Also an article on the theft of public funds and mismanagement of the Mullahs and Ahmadi-Nejad under the title of “Did you know?” scream to be translated into English!

AntiMullah (time permitting and setting when it will get done) plans to translate both of these very damning and important revelations or expose' texts. The statistics in both are mindboggling.

If someone beats us to it so much the better but this has to be made available to the Western public and also show exactly who and what it is that Oba-Hussein is supporting with all his power - except a mealy-mouthed “Iran must follow International laws.....” statement.

There has been a huge sweep of Mullah talking points spreading in the diaspora praising his statement as if it were a real threat to the regime. One excuse for the praise has been that it's better than nothing and should be “praised and encouraged”!!!!

And thus NOT require him or the USA making a stronger statement or take any supporting action.

Just talked to a friend who may help in the translations to accelerate results.

Also view the  Newt Gingrich short video that is also damning of the administration in a very logical way AT THE END of this article.

Also note: the NIRU military declarations 1 & 2 are in fact initiated and financed by the "recently demoted" ayatollah Rafsanjani (one of the richest men in the world) through a former Iranian police Colonel now based in Turkey. The text of the second announcement as posted in the article below this, leaves little doubt of the source of this Azadi movment.

One certainty is that the Azadi movement is NOT intended to change the regime from an Islamic one.

Rafsanjani has been funding much the protests in Iran though in an effort to find a common external enemy the regime is blaming England (calling in the British ambassador to complain), the USA and Israel for "hands on", "boots on the ground"  organizing of the demonstrations!

Ahmadi-Nejad insists Israeli, American and British agents are present in the streets and conducting and tactically running the demonstrations.

This was true - except it was the Soviets out of their Tehran embassy  with their MEK and Fedayeen surrogates - in the street crowds of 1979, which brought Khomeini to power. Thus Ahmadi-Nejad the Turd has a foundation for this line of thought. Certainly enough to float the balloon. He eventually came to power this way.

AND TRUE OF THE REGIME ORGANIZED AND ORCHESTRATED COUNTER-DEMONSTRATIONS IN TEHRAN TODAY.

So much for the GIRLIE pussy-footing by Obama, RAUCOUSLY encouraged by pro-Islamic Iran regime shills and Dhimmis in the USA,  to AVOID being accused of involvement in the anti-regime protests.

Iran does NOT need this to be a reality in order to make the accusation so why play their game. Oba-Hussein the American Khomeini uses anything he can to protect the Isalmic regime and minimize the Jihadi terrorism events which have started to emerge on his watch - but NOT in the previous EIGHT YEARS of Bush.

Unable to prevent them he dismisses them. Even to the point of sending Senate Foreign Relations Committee Chairman, John Kerry to Iran as soon as possible for a nice chat with the blood soaked Mullahs.

The Al Qaeda organized airline bomber is just a poor demented boy and not part of a terror organized project claims Oba-Hussein.

Nor was the demented Major Hasan Nidal slaughter of 13 and wounding of 30+, who went to the same Al Qaeda religious source in Yemen as did the Xmas bomber. A total silence on information has been imposed  and what actions are being taken on this militant, Jihadi Moslem murderer. Even the FBI is being kept out of the information circle.

Like an ostrich with head stuck in the sand, Oba-Hussein has denied there is such as thing as terror, calling it man-made overseas something or other to deny it exists. Terrorist or terrorism has been removed, scrubbed from our government vocabularies. As if somehow by removing the name to call it , the threat is also removed.

He uses the word EXTREMIST without ever qualifying it as Islamic extremism! As an apparently  good Moslem himself he cannot do any such thing. Note in the coming days and weeks how he avoids linking anything to Islam. Or terrorism.

He puts an inept, ludicrously unqualified Janet Napolitano as Head of Homeland Security to make terrorism against the USA even easier to carry out. She is totally clueless - which apparently is what Oba-Hussein wants her to be and why he chose her and has not demanded  her resignation.

The Gingrich video below also describes Attorney General Eric Holder's past and the incredible conflict of interest in having this man in Justice - in any position - specially dealing with terrorists which his law firm defended.
ONE GREAT long-time FEAR that some others share with AntiMullah is that the regime - with little to lose - will let fly with military helicopters firing machine guns downward and decimating crowds of protesters. Killing thousands, perhaps tens of thousands in an effort similar to detonating explosives over a burning oil well to snuff it out.

Their mind set is that if tens or scores of thousands are killed, the fear will overcome the anger. And they will remian in brutal power.

AND what will the West do? More sanctions, reduction of imported refined vehicle fuels? SO WHAT? Which Mullah could care less?

Enemies of the West will still provide nuclear fuel to the Mullahs and once they get a few more nuclear weapons a military attack on the country will become a non-option.

Intelligence sources disclose some 1350 TONS of nuclear raw nuclear material is being smuggled into Iran from Khazakestan as we speak!

Horrified and cowed by the strength of the Mullah brutality the populace (Iranians respect power and turned on the Shah when he made his "I have heard you speech" instigated and forced on TV by members of the Empress' liberal family and not by him) will not risk any more of their friends and family dying by coming out in the streets. 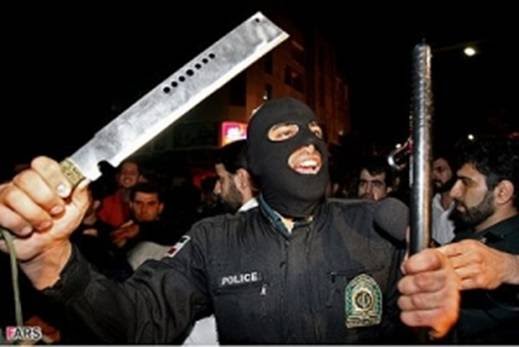 Covered in Persian blood, the Mullahs will not only control Iran but the Middle East! Spreading and promoting their Isalmic Jihadi terrorism with greater ease.

Khamenei and Ahmadi-Nejad could choose this method and their safety within an Iran they control ruthlessly, to fleeing with the billions they have and risk arrest or assassination at the hands of governments or agents sent to countries where they seek refuge.

DO NOT forget, Ahmadi-Nejad is a lunatic, 12ther HOJATIEH! He believes that it will take unimaginable death, misery and suffering to bring the world to the attention of the 12th Imam, the Imam of End Times and have him reappear on earth from the well in Iran where he disappeard 1,300 years ago and to redeem it.

He and his ilk are nutcases and this needs to be brought into the analysis as a possibility if not a probability.

Again, what is the rest of the world going to do about it?

Nothing much. Specially with Oba-Hussein-Khomeini running America and causing it so much pain and suffering that "we the people" will be too pre-occupied with our own survival and obtaining our daily needs of basic food and some money to care about Iran.

Think about this as part of the thoughts running through the Mullahs ruthless, self-serving heads which are bereft of any conscience or human kindness.

What is there to stop or even discourage the Mullah regime from performing the slaughter outlined above? Some drops of milk of human kindness?

Fear? Fear of what compared to the fear of NOT doing something like this in self-preservation?
Now, form your own opinion. AND WATCH NEWT SHOW HOW LOGICAL HIS OPINIONS ARE: