REGIME ORGANIZES DEMONSTRATORS - FEEDS THEM for showing up. 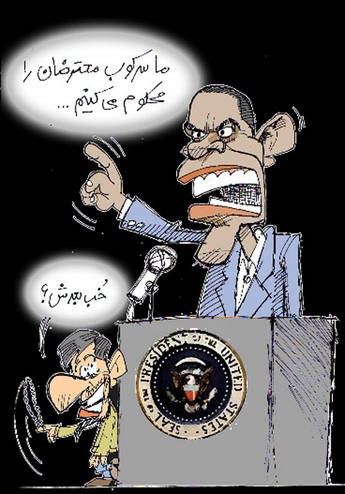 Oba-Hussein: We condemn the suppression of dissent!

Ahmadi-Nejad the Turd: So who cares (what can you do about it)?


Just as in the days of the 1979 efforts by Khomeini to bring anti-Shah crowds into the streets, with money wrapped inside a half-sandwich, Ahmadi-Nejad bussed in "supporters" from all over the country to Tehran to field a counter-demonstration.

This video shows food trucks handing out sandwiches (without money inside, so far, but to feed the provincials they brought in) despite all this, despite claims of "millions" of supporters a closer estimate maxes them out at around 50,000 "supporters".

These consist of the families of Bassijis, Revolutionary Guards, PRISONERS (with promises of better treatment) and anyone else they could persuade or coerce.

Let's see if the regime will carry out their plans to explode bombs among those bussed in over the coming day or two as a false provocation to retaliate and kill thousands of opposition demonstrators and students. And arrest top leaders like Moussavi and Karroubi.

Last night over a thousand students were arrested at their university dormitories.

Rumors from Iran say Moussavi has left town to avoid arrest. Other sources state he is still there.

Events are unfolding as we speak.

Coming up later, tonight or tomorrow,  read a full story on "who is Khamenei" and his family and entourage and his enormous ill-gotten wealth. At the start of the revolution in 1979 he was begging in his home town Mashhad cemeteries for spare change in return for unrequested, breathless prayers beside coffins being carried toward graves.

He lived in a miserable hovel and received a monthly "care package" of food staples from the Imam Reza shrine charity.

Read how he lives now. Even the late Shah never lived so exotically!