Even the most critical leftists could not deny that HUNDREDS OF THOUSANDS attended the ANTI-Obama policy rally, with some estimates going as high as nearly one million people - who CARRIED NO SIGNS and left no trash behind!!

Ooops! Except this one? To parse "what is, is" he is wearing it, though it could be a form of carrying (smile) 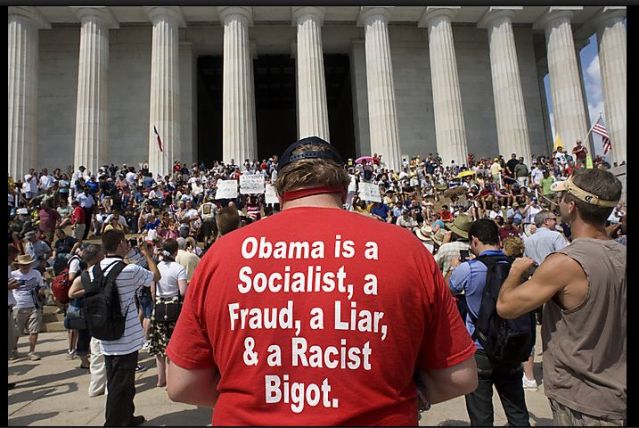 Obama's apparent hatred for America seems to be ignoring the destruction of our country he is causing on an insane level - whether from sheer ignorance, inexperience or as part of his determined imposition of his Marxist-Islamist ideology.

His "insane change ideology" can be seen in his reporting Arizona to the United Nations Human Rights Commissions, which with over 50 Islamic members and Obama's backing/encouragement are issuing a condemnation of Arizona's Human Rights policies (illegal alien SB 1070) - while IGNORING the brutal Human Rights violations in Islamic Iran, Sudan, Somalia, Nigeria, Saudi Arabia and a host of other countries that kill, rape, torture their populations on a daily  basis and often breed terrorists to attack America.

His actions have given Obama a 78% approval rating among Moslems (both inside and outside the USA).

Little wonder when he drops cases against the Black Panthers for threatening our freedoms, he stops the prosecution of the SS COLE ship terror attack in Yemen,  he sabotages the prosecution of the 9/11 attack by trying to turn it into a CIVILIAN criminal prosecution instead of allowing military tribunals to go ahead as planned, he blocks (puts on hold) the Fort Worth prosecution of Moslem Major Nidal Hasan, who killed a bunch of innocent, unarmed Americans - I could go on and on - but Obama's underlying ORDERS BANNING any mention of Islam and Terror in the same context underline and emphasise his bias against the country HE MAY NOT even be eligible to lead.
Obama consistently perverts justice to favor those HE favors and uses thuggish actions to impose his twisted ideology like the street level goon he grew up to become, inspired by the Liberation Theology of people like Reverend Wright he espoused.

Where America is the oppressor and the whole world is the victim, specially his Moslem nation backers and his good buddy George Soros, who stands to make BILLIONS when the US Dollar crashes. And who will use his investment/shares in Brazilian oil with which to barter for whatever he and his family needs.

We the people will have been financially enslaved and not feast at his and Obama's table.

AND gold or other precious metal will not be the answer. Whoever tries to buy it will have to pay for it with WHAT? A worthless currency. So your  gold holdings would be worth a few cents at best or in fact NOTHING.

And efforts to barter it, or silver, will receive some response to start with but when it becomes a useless piece of metal that nobody can use, like any paper currency, then pure barter of an item of service will become the going "currency" or locally printed "money scripp" good for your neighborhood or municipality only. These might combine into slightly larger communities.

links for live reports and coverage below this graphic:

Class of '97 Freeper Pete is live Tweeting http://twitter.com/pberry1_98   updates and photos http://www.yfrog.com/froggy.php?username=pberry1_98   . He has a thread going in Bloggers http://www.freerepublic.com/focus/f-bloggers/2579046/posts

Folks camped out overnight at the Lincoln Memorial for the rally.  http://www.freerepublic.com/focus/f-news/2578997/posts

Live traffic cam - National Mall (on map, click the Mall or other locations of interest.
http://app.ddot.dc.gov/services_dsf/traffic_cameras/map_15.asp