It is with great sadness that we share the the passing of Princess Azadeh (Dodi) Shafigh Pahlavi, daughter of H.I.H. Princess Ashraf Pahlavi, the late-Shah of Iran's twin sister, in a New York hospice, where she was being cared for her cancer.

I remember Dodi as the adventurous kid sister, full of humor and strong principles of a best friend, Prince Shahriar (Poudzi) Shafigh (Chafigh), who was assassinated in France by the Islamic regime to remove the most capable military officer likely to lead a military action against the regime.

Also remember her as an important activist for royalist, anti-Mullah efforts, including in  London, where she crossed the English Channel to attend demonstrations against the Mullahs.

I remember her seated happily, at a vantage point to watch a royalist march, on top of the cabin of a large truck which had been rented to bring in the flags and banners for the 12,000 or so participants - which back in 1979 was a huge surge from the 27 people at the the first protest outside the occupied Iranian consulate. Of this number 25 were various organizers!

May she rest in eternal peace, as we feel the deep loss in our heavy hearts. 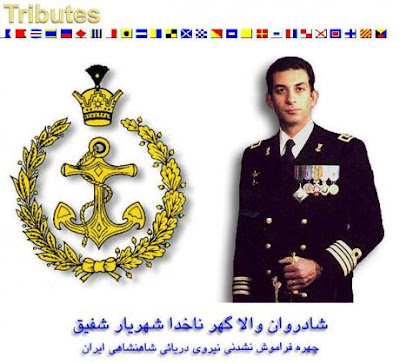 Shahryar Shafiq was an Imperial Iranian Navy Captain, and the only member of the Pahlavi Dynasty who chose a military career. After the victory of the Islamic Revolution in February 1979, he was the only member of Dynasty to stay inside Iran and keep fighting against the Islamic revolutionaries, up to the point when he had to flee in a small boat from the Persian Gulf to Kuwait, under heavy fire.

In 1967, he married Maryam Eghbal, daughter of Manouchehr Eghbal, who was earlier married to one of his uncles, a half-brother of the Shah. They had two sons: HH Prince Nader Shafiq (born 15 March 1968) and HH Prince Dara Shafiq (born 1970).

After exile, he joined his family in Paris, France and began organizing a resistance movement inside Iran. He was assassinated in Paris on December 7, 1979, being shot twice in the head on the Rue Pergolese by a motorcyclist, the Prince reportedly drawn to the location by a former royal  bodyguard, whom he trusted and who sold him out to the Mullahs.

Thank you for this interesting information. I am happy I found you and your blog.