ANOTHER LOOK AT THE NORWAY LABOR PARTY PALESTINIAN AFFILIATION 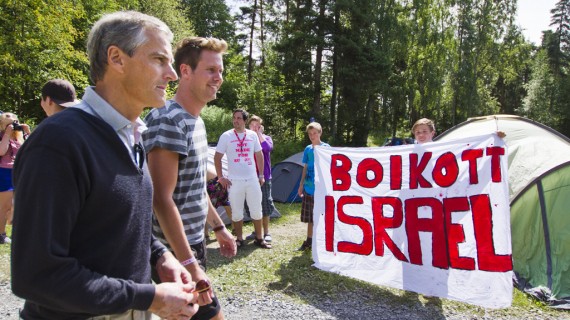 The Palestinians “must have their own state, the occupation must end, the wall must be demolished and it must happen now,” said the Norwegian Foreign Minister to cheers from the audience. 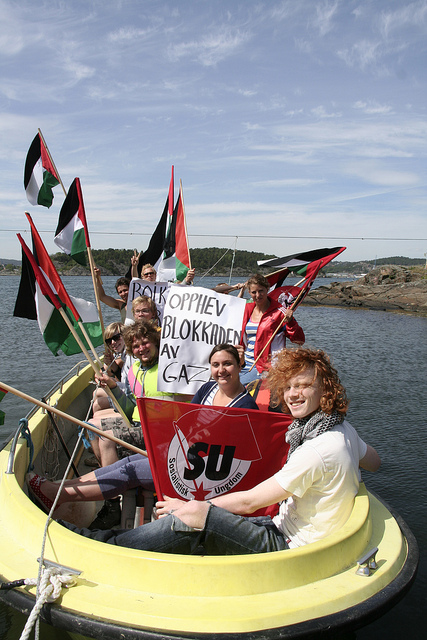 The main activity at the Utoya Island Meeting were mock “Break the Israel blockade” games.

One event was Palestinian aide boats would try to break the Israel blockage.


Utoya camp was not Islamist but it WAS something not much more wholesome (by our standards, at any rate).

It was a summer indoctrination camp run by Norway’s ruling Labor Party for up-and-coming children of the ruling elite.

Glen Beck was not far off when he compared it to the Hitlerjungend or Young Pioneers.

It’s so the junior members of the aristocracy can be properly told what to think and can network with each other in preparation for their brilliant careers ruling over the peasants.

I saw at least one article that had photos of previous summers with the little dearies and their handlers assembling Israel-bashing displays.

We Americans had similar traditions further back in the twentieth-century. The likes of David Horowitz and Ronald Radosh have written of the red-diaper summer camps their parents sent them to.

There are still institutions such as the “Midwest Academy” where budding labor activists go get schooled in labor and community organizing over the summer.

Not to mention the many religiously-oriented summer camps that have long been a cultural staple.


﻿
﻿
The camp was run by the Youth Movement of the Labour Party and used to indoctrinate teens and young adults.

Breivik was targeting the future leaders of the party responsible for flooding Norway with Muslims who refuse to assimilate, who commit major violence against Norwegian natives, including violent gang rapes, with impunity, and who live on the dole... all done without the consent of the Norwegians.

The day before the shooting, a pro-Palestinian rally was held. LINK

In an interesting article Breivik and totalitarian democrats in which Sevje, the Norwegian ambassador to Israel is quoted:  Totalitarian Democrats CLICK HERE

"Ma’ariv asked Sevje whether in the wake of Breivik’s terrorist attack Norwegians would be more sympathetic to the victimization of innocent Israelis by Palestinian terrorists.

The author of the article notes:

"So in the mind of the illiberal Norwegians [the Labour Party], terrorism is justified if the ideology behind it is considered justified.

ALSO take a closer look at the progression of Islam in the UK! There are now SHARIA CONTROLLED ZONES spreading across the country.

Only days after a deranged Anders Breivik claimed creeping Islamization of Norway as an excuse for cold-bloodedly murdering 76 people, the majority of which were children, a group of British Muslim extremists have seemingly mocked the tragedy by hanging bright yellow posters in several London boroughs declaring them “Sharia-controlled zones.”


One has to wonder about the timing.

“We now have hundreds, if not thousands of people up and down the country willing to go out and patrol the streets for us,” said Anjem Choudary, 41, the Muslim “preacher” claiming responsibility for the poster campaign.

A former lawyer, Choudary says that besides addressing “the sort of thug life attitude you get in British cities,” the campaign’s goal is also “to put the seeds down for an Islamic Emirate in the long term.” Choudary heads the banned radical Islamist group Islam4UK and has advocated for a Sharia-ruled Great Britain.

Choudary has a long association with radical Islamic politics in Britain. He was the co-founder of the Salafist group al-Muhajiroun (“the emigrants”) with Omar Bakri Mohammed​. Bakri, a Lebanese citizen, once headed Great Britain’s Sharia law court and was prohibited from returning to Britain from Lebanon in 2005. The British government banned al-Muhajiroun last year.


Choudary also has a record for provocative behaviour. He once called the 9/11 terrorists “magnificent martyrs” and said the 2005 London subway bombings had been only “a matter of time.” He has also called for the execution of Pope Benedict, saying the Catholic leader had insulted Islam.

Who says America belongs to you? It belongs to Allah!!!! Obama PUBLICLY stated "America is no longer a Christian country! And we have more Moslems in the USA than any other country"!

BOTH Obama statements trying to lay claim of the USA for Allah, power for Obama and disowning all of the rest of us of our God given and hard EARNED rights! And freedoms, which do NOT exist under Islamic religious tenets or Sharia socio-political law.

But Choudary is probably best known for a statement he made on a British television show after the interviewer suggested he should move to a country that already had Sharia law if he did not like Great Britain. Enraged, Choudary told the interviewer: “Who told you … that Great Britain belonged to you. The country belongs to Allah! If I were to move to the jungle, I would also not live there like the animals.”

One of the London areas targeted by the poster campaign, Tower Hamlets, has also seen “gay-free zone” warnings pasted on its walls in recent months, as well as women threatened by Islamists if they were not wearing headscarves. As a result of his extremist views, Choudary has received little support from Great Britain’s mainstream Muslim groups.

In a way, Choudary’s Sharia poster campaign is similar to the plan a Muslim group in America had to build a mosque at Ground Zero. With the Ground Zero mosque, the location was very suspect, while with the sharia posters, it is the timing. The possibility of a connection between the posters and the Norwegian tragedy may or may not exist, but the cultural and spiritual insensitivity of both initiatives, however, is great, especially with respect to the Ground Zero mosque plan.

But in the case of the poster campaign, just when Europe — and the rest of the world for that matter — is trying to come to grips with the senselessness of Norway’s tragedy, to promote Sharia law so soon after the event, whether deliberately or not, and claim it is part of a long-term plan to turn Great Britain into an Islamic state, is as unfeeling as it gets. Indirectly, with their posters the British Islamists are supporting Breivik’s evil, indicating his analysis was essentially correct concerning both the Islamization of Europe and multiculturalism. After all, the Sharia posters are obviously not an enlightened multicultural exchange.

Columnist Thomas Sowell described the planned mosque at Ground Zero as a big middle finger being given to America. The same can be said about the poster initiative vis-à-vis the Norwegian massacre. There is a human impulse to commiserate with Norwegians at this time, but the Sharia posters are not only devoid of compassion but also strike at our basic human sensitivity.

And it is useless to think the Islamists will ever stop to think about some of these things. They have long used our tolerance to promote their intolerance and now are using our sense of decency and compassion against us to mutilate our world. Perhaps the more important question concerning this matter is why the community of moderate Muslim leaders is not condemning this offensive behaviour.

To their credit, the British police are investigating the posters with the intention of prosecuting the people who put them up. Part of the reason is to prevent any escalation. If Choudary’s Islamist thugs are allowed to walk the streets and enforce Sharia rules, frightening and intimidating people, the police know it would only be a matter of time before there would be a very unpleasant counter-reaction.


Ironically, because of the Oslo massacre Choudary says he is organizing a march against the English Right. Never ones to miss an opportunity, it is obvious that Islamic extremists like him will now cynically use the Oslo tragedy to deflect attention away from their own extremism.

“The Muslim community needs to be vigilant,” he said. “There is an undercurrent against Islam. I do believe a Norway-style attack could happen here.”


Contrary to Choudary’s belief, a Norway-style attack has already taken place in Great Britain. The 2005 London subway bombings by Islamic extremists took 52 lives and injured more than 700 people.
Therefore, due to this home-grown tragedy, perhaps the most fitting prohibition symbol Choudary could put on his posters is one of a crossed-out bomb.
Posted by Alan Peters at 6:02 PM

Email ThisBlogThis!Share to TwitterShare to FacebookShare to Pinterest
Labels: CHOUDRY

The Choudary posters appeared a week before the massacre: http://www.pinknews.co.uk/2011/07/18/more-extremist-posters-appear-in-east-london/

Try again with your attempts to link that to the massacre. Also, one bigot putting up posters does not make an area 'sharia controlled'. When people put up posters saying 'the end of the world is nigh', it doesn't make it true. Choudary is just the Islamic equivalent of Fred Phelps - a bigot with a talent for publicity whose 'following' is his family.