Alan Note: taking a repeated look at the pervasive infiltration of radical Islam's shills into our society and the disproportional influence they muster under the Moslem protector Obama can be mindboggling at the bias evidenced in the White House or the Eric Holder Dept. of INjustice!

For instance, the Islamist Obama's fervent attack on Catholics/Christians via contraception, in reality a power grab of the Executive telling Religion (usually exempt for conscientious objection reasons) ) and others what they MUST do or else, has an interesting sidebar. Islamists were secretly informed that they have already been given a waiver and none of this would apply to them!

Even the aspect of exempting the churches and charities and TELLING insurers they must provide free contraception is bogus as it means that Catholic insurance companies cannot exist and remain in compliance! Nor can the self-insured Catholic organizations.


What is next that Obama will order people to do (according to his total abrogation and repudiation of our Constitutional rights and freedoms)? Bow to Mecca five times a day because that's what Moslems do and it is a great form of exercise and we must become healthier as a nation? So even if we are NOT  Moslems and conscientiously object to Sharia and having to do this, we MUST do as he says - it's good for our health.

And bad for our health if we refuse and cost us a fortune in fines and penalties! In some cases face arrest and incarceration for disobedeince - as is the general case in the Moslem countries he admires and supports but made even worse when he shoved their rulers and replaced them with MUCH WORSE Moslem Brotherhood factions, which had no chance to get into this much power till he removed obstacles those former "Moslem" leaders set up against the Brotherhood and Iranian style of brutal, ruthless administration.

Iran, currently behind the brutal Syrian slaughter is causing an even greater rabidly "Islamic" opposition infiltration by Iraqi Al Qaeda and Botherhood influence (founders of Al Qaeda) to grab ascendency in Syria.

The icing on the cake for Obama in all this, specially after Egypt's changes, is that Syria provides an equally close path to destroying Israel.

Unless he is removed from power, ObaHussein may well go down in history as a far worse global curse than Hitler, Stalin or lesser ones like Khomeini.

Not even simpleton Carter, with his Communist mental abberations and his giving rise to terrorism around the world, from which we still suffer, can ever achieve  the level of destruction being waged upon us by Obama.


==========
Please click here HERE to watch Anatomy of a Smear: 'The Third Jihad' Fights Back, our new short video response to the CAIR/New York Times attack on The Third Jihad. 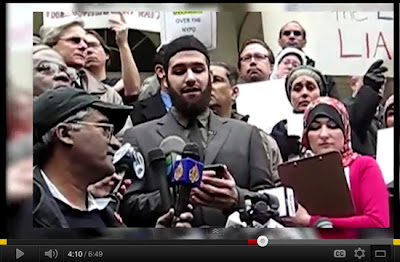 This story could be a chapter right out of our film: CAIR, a group with proven terror ties, is criticizing the NYPD for its efforts to effectively fight terrorism. This campaign against the NYPD is part of CAIR’s larger mission to use our sensitivities toward political correctness to stifle awareness and honest debate about the threats posed by radical Islamists.

Please forward the link to the above video and to the free stream of THE THIRD JIHAD  to your friends and colleagues.

Below is a sampling of articles countering CAIR and the New York Times that have been written in dozens of the nation’s largest and most respected newspapers and online media outlets.