A suicide car bomb in Afghanistan today killed 14 primary school children in what officials said was a failed attempt to blow up a meeting of tribal elders. 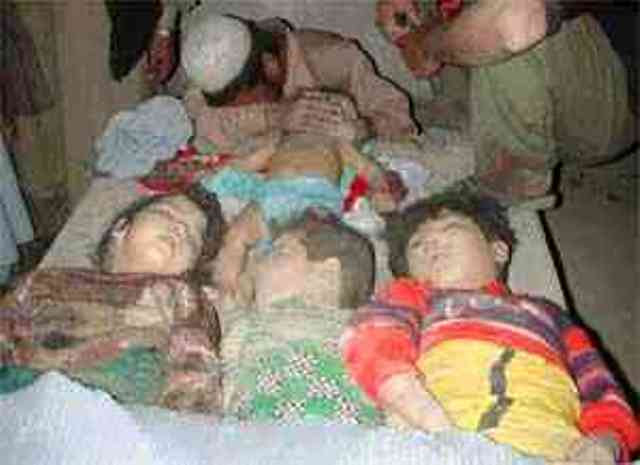 ;"> The blast, in the country's eastern Khost province, also killed an Afghan army soldier and a security guard, and injured 58, including at least 40 civilians, the US army said.

Video footage of the bombing, taken from a security camera, shows a group of children, apparently returning from school, walking alongside a road that had a checkpoint guarding a district centre.

A dark-coloured 4x4 vehicle is seen ­snaking through the barriers placed on the approach to the checkpoint, before detonating just as it drew level with the children.

"It's absolutely blatant. Children walking past, and then they detonate the vehicle bomb," said a spokesman for the Nato-led International Security Assistance Force (Isaf) in Afghanistan. "The driver was able to see the children, there's no doubt about that at all."

The violence that stalks the entire region was underlined by a separate suicide bombing today in neighbouring Pakistan, close to the Afghan border. The attack, which killed at least 30 people, comes as tensions between India and Pakistan brings the threat of war closer.

In Khost, the children killed were aged between 8 and 10, according to a Abdul Rahman, a doctor at a hospital near the blast.

Photographs of the suicide bombing's aftermath showed bloodied text books lying on the ground beside small pairs of shoes. It came on the last day of school for the year. Students had been to school to receive end-of-year certificates.

"The brutality and disregard for human life by terrorists is sickening, as I continue to witness innocent men, women and children being killed and maimed in the pursuit of this pointless insurgency," said General David McKiernan, commander of Isaf and US forces in Afghanistan.

The intended target of the Khost bomber is likely to have been a meeting of tribal elders, called to discuss security issues, that was taking place inside the compound that the vehicle was approaching.

In Pakistan, the militants struck at a polling station in Buner, in the country's troubled north-west. An explosive-laden car rammed into a queue of people waiting to vote in a byelection.

Buner lies next to Swat, a valley in which the Pakistani army has been in a full-scale operation against Taliban-linked insurgents for over a year. The suicide attacker pulled his car outside the polling station, and asked people to push the vehicle, saying that it had broken down, said Iftikhar Hussain, a minister in the North West Frontier Province regional government.

"His purpose was to gather the maximum people around the car. The moment people started pushing the car, he blew it up," Hussain said, adding that the attacker's message was that "it is not possible to hold a peaceful election" in Pakistan.

The latest violence in Pakistan north -west comes as the country is pulling troops out of the area, in order to redeploy them along its eastern frontier with India. Since Mumbai was attacked last month by terrorists, who Delhi says came from Pakistan, the two countries have faced-off in an ever more tense confrontation.

It is feared that the movement of troops in Pakistan will divert its army's attention from the threat of Taliban extremists in its western region and inside the Federally Administered Tribal Area (Fata), which borders Afghanistan. These militants have been targeting Pakistani forces in Pakistan and the international coalition across the border in Afghanistan.

"For Islamabad, the threat posed by terrorists operating out of Fata and from along the western border to this country's internal security and stability is no less tangible; it just cannot afford to redeploy any large number of its troops on the eastern border, leaving the 'wild' west in a free fall," Pakistan's Dawn newspaper said in an editorial published today.